Mothkittens are baby Mothcats who've not yet lost their baby fur. They hatch from cocoons about 3-5 cm high, and they are considered kittens until they are about three months old. 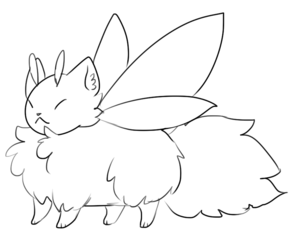 When Mothkits first emerge from their cocoons, they are covered in a special liquid that evaporates quickly when exposed to air. Mothkits typically sunbathe right after emerging to dry their fur and wings. Once dry, Mothkittens become tiny (and often mischievous) balls of fluff that rapidly whiz around until they run out of energy.

Mothkitten fur is very fine and dense. Holding them would feel similar to holding a bunny. Mothkits lose their baby fur two to three months after emerging from their cocoons. Before then, it is very difficult to determine what traits a Mothkitten will have when it sheds its baby fur. During this time period, Mothkittens' eyes are underdeveloped and don't properly show their true eye color(s).

Mothkittens usually bathe by rolling around in dust baths. Because of this, they sometimes leave a trail of dust or glitter, depending on what they recently rolled in.

Mothkittens are typically found near Mothlions, a larger subspecies of Mothcats which are known for raising Mothkittens. Sage is a Mothlion who actively seeks out homeless Mothkittens and cocoons in order to raise them and protect them from harm. Catching a Mothkitten can be quite tricky because of their speed, and due to their size, finding a sleeping Mothkitten is almost impossible. The easiest way to obtain a Mothkitten is to find a cocoon in the wild or to adopt one from a Mothlion (if deemed worthy).

Mothkittens are very energetic but can get very anxious. They prefer to stay in groups and don't like being by themselves. When left alone, Mothkittens will usually squeak or wail until someone comes back to them. Fortunately for many Mothkit owners, Mothkits typically sleep 16-18 hours a day. Mothkittens are most active at night and are often caught playing pranks on their sleeping caretakers.

Finally, Mothkits feed mostly off of sugar water for the first two weeks of their lives. They can then transition to eating solid foods, such as insects. Adult Mothcat diets consist mainly of insects, but they retain the affinity to nectar and sweet liquids as part of their childhoods. (Such foods, however, are considered too nutritious for adult Mothcats and should only be consumed as a treat instead of a meal.) 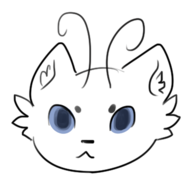 Mothkitten eyes a re underdeveloped and are available in a certain range of colors.

Mothkittens all follow the same basic anatomy. Most of their body is covered in fine, dense fur, which will eventually shed into their mane. The only traits that are defined at this stage of their life are their antennae and wings. Their ears and eyes are still under development and may change as they age.

Mothkittens have eyes similar to mundane kittens. Their eyes are usually a deep grey-ish blue. Their true colors don't show until after reaching three months of age.

The appearance of Mothkittens can sometimes be influenced by their breed. Other traits may be apparent as well but it usually only shows in their tails.

Mothkitten MYO's are available through the exclusive MYO tier. A standard Mothkitten can be created using a basic EX MYO, but other breeds can be made if another exclusive trait change is used on the design.

Mothkittens are eligible for "aging" two months after adoption. Some traits are pre-determined, such as ears*, antennae**, and wings. Other traits are determined by chance (1% legendary, 6% ultra rare, 23% rare, and 70% common). Mothkitten owners are able to choose between any available (or otherwise) trait for the adult Mothcat. If you own a Mothkitten and are looking to "age" it, please send a note to floramisa

** Mothkittens born with horn nubs will have an equal chance to develop any "hard" antenna trait (which will be determined by chance- the owner of the Mothkitten does not get to choose.)