Enchanted Breeds of Mothcats are any kind of Mothcat that aren't living, breathing creatures- whether this be animated objects, undead Mothcats, or anything else! Enchanted Breed Mothcats often have usual traits, parts made out of non-Mothcat materials, and can be totally composed of other materials!

Enchanted Breed Mothcat traits can be highly variable, and many even in the same broad categories will have totally different traits from each other. They can, however, be grouped into two broad categories:

Some of the general types of Enchanted Generated traits are as follows:

Up to two Enchantment Generated traits can be used per cat, extra can be added with EX TCs.

Converted traits are any traits based off existing Mothcat traits, but made out of non-Mothcat materials, or otherwise changed by the nature of the Enchanted Breed. They are optional, but can be used to add a bit more variety to a cat!

Converted traits require access to the base trait in order to be used. As such, their behaviour changes somewhat based on the original rarity of the trait.

While there are many possible Enchanted Breed Mothcats, they fall under four broad categories: Toy, Sugar, Undead and Other. Each category has certain traits required for a Mothcat to be considered part of them. 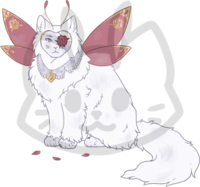 Toy Mothcats are any Mothcats that are composed of anything that would be generally considered a toy, such as stuffed animals, dolls (including collector's dolls), and similar.

The required trait of Toy Mothcats is Toy Eyes:

Other possible traits for a Toy Mothcat include, but are not limited to: 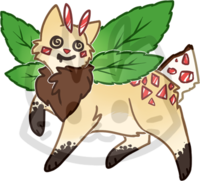 Sugar Mothcats are any Mothcat made out of dessert, or having sweet food based traits.

The required trait of Sugar Mothcats is a Candy Face:

Other possible traits for a Sugar Mothcat include, but are not limited to: 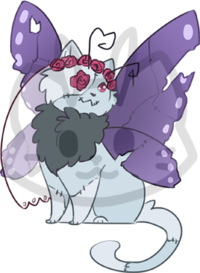 Undead Mothcats are Mothcats that were reanimated in some fashion after an untimely end, and show the marks of their brush with the grave

Undead Mothcats require at least one Undead trait, but it does not strictly need to be on the face. Some examples of possible traits include, but are not limited to:

Undead Mothcat traits cannot surpass a PG-13 rating. Please look at Zombie and Translucent Neopets if you want an idea of the level of detail generally allowed! 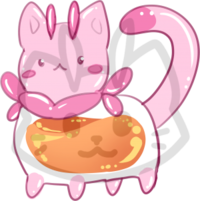 "Other" Enchanted Breed Mothcats are generally Mothcats composed of a non-Mothcat material, but that aren't considered Toy or Sugar. This can include robotic Mothcats, or Mothcats made out of mundane items, as examples..

As the nature of these Mothcats depends heavily on what they're intended to be made from, or based off of, example required traits cannot be provided. However, all Mothcats in this category require at least one trait that clearly belongs to whatever they're supposed to be.

While it is highly recommended all Enchanted Breed Mothcats get a design check prior to submission, all "Other" Breed Mothcats require a check, in order to make sure your chosen traits will qualify for the requirement!

Pre-made Enchanted Breed Mothcats may be available through sources like sales and events. They will be labled as such!

Enchanted Breed Mothcats are also able to pass their breed down through breeding, unlike most enchantments!

When creating a Enchanted Breed Mothcat, whether by MYO or converting an existing cat, there's some specific guidelines to follow in order to make the process as simple as possible for all involved.

Enchanted Breeds can be applied to a Mothcat using a Grade 3 Enchantment Potion. While EX TCs can be used to allow more Enchantment-Generated traits on a cat, they cannot be used to apply the breed alone.

It is highly recommended you get your design checked before you start seeking resources, or making final plans, so staff can verify your plans are viable!

How to Format a MYO Submission/Design Update

How to Format a Design Check

To check if your Enchanted Breed plan is viable, please use the Enchantment Appraisal here, and fill out the "Enchanted Breed" form.

Ideally, design checks are done when you have a MYO slot, so everything can be input as it would be on submission. You don't need to have final art or have all items, but please be respectful of staff time and only check if you are fairly certain you are going to go ahead with the design if viable.

Generally, format as close to the design update/myo submission as possible. This helps staff in making sure your plan is good to go!