Mothcats are a moth-cat hybrid species created by magic by the Great Fairy Falena. The original Mothcat was a Mothlion, named Sage.

Mothcats have existed since ancient times, starting out as a whimsical experiment done by Falena, ruler of the universe. Falena wanted a guardian for her kingdom - one that would be able to roam the skies with her - so she took the DNA of a lion and mixed it with some of her own, giving birth to the first fae-lion. This lion developed velvety wings, unlike Falena's fairy wings, so she named them after the likeness of moths.

For the first few centuries, Sage was perfect for what Falena needed, but being part lion, he started to grow too large to keep as a pet. Falena wanted something easier to take care of, so she created a smaller version of her Mothlion, now known as the standard Mothcat.

At the beginning, Mothcats were simply cats with moth-like wings, but fairy experimentation and natural evolution led to many different types of Mothcats - some more "natural" than others.

Fairies were particularly fashionable creatures who wanted companions that fit their aesthetics. They experimented with common Mothcat DNA, leading to wild traits, such as different animal and elemental traits. Some traits were more stable than others, while others were flat out anomalies that couldn't be replicated. There are many kinds of Mothcats out there, and some still yet to be discovered!

Feral Mothcats who escaped captivity to live on their own found themselves evolving to their environments. Some Mothcats evolved to the point where they were considered entirely different sub-breeds. Some evolution-based traits overlap with experimented traits, and others simply overlap in general. An example of a natural versus unnatural trait is glitter - while naturally found in Rock Mothcats, they were artificially added to Mothcats by fairies who wanted extra sparkly companions. Likewise, natural overlaps occurred, such as with feather-based iridescence and rock-based iridescence.

Some Mothcat traits are born from human interference, such as folded ears. After this trait was developed by humans, fairies found them very endearing and helped develop a gene line that would not have the negative health effects seen in human-raised Mothcats. 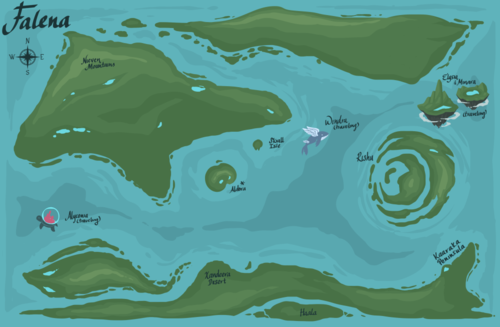 Map of Falena, illustrated by floramisa on DeviantART.
Mothcats are sociable creatures that live in colonies around the world. They have a wide range of traits, depending on where they live. In general, Mothcats have no specific "habitat" but certain breeds are only seen in certain areas. The most concentrated and diverse home for Mothcats is a small island, called Aldora, off the coast of a much larger content, Aldor.

Humans residing on the main continent have taken to keeping Mothcats as pets, much like their fairy counterparts. However, feral Mothcats residing on Aldor typically live near rural-suburban areas where they can safely form colonies close enough to human society for sources of food but far away enough not to be bothered by them.

Poaching is a common threat to Mothcats, who don't have many other threats to their population. Mothcats are highly desired by collectors for their unique traits. The rarer the traits, the more at risk the Mothcat is. This is more commonly seen in the Eastern regions of the world, where some cultures depict rare Mothcats as symbols of luck - or ingredients to be consumed for longevity or magic power development.

Mothcats are omnivores who mainly eat flowers, insects, and small mammals in the wild. They love eating sweets, such as honey and flower nectar, which are necessary for their diets as kittens. As adults, such foods hold no nutritional value to them.

Mothcats who have been introduced to human society can also be seen consuming foods such as cookies, pies, and many other pastries. Ones who live in particularly luxurious households may also have diets consisting of raw meats, as well.

Mothcats are born as regular cats who need to be wrapped in their parents' mane fur in order to be "transformed" into Mothkittens. They are Mothkittens for the first two or three months of their lives before their adult traits begin to finalize.

Mothcats have enhanced lifespans, due to their fae blood. They live to be about 50 years old on average, though some Mothcats can live up to 60-75 years if raised properly. This makes them ideal life-long pets for humans.